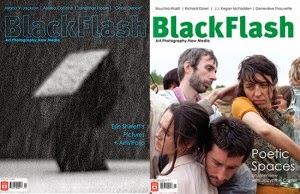 Esther Bourdages: According to the historian of media arts and experimental music, Douglas Kahn: “Comparing the artistic utilization of the mechanical recording of the objects of the two major senses, that is sight and hearing (what John Cage calls the public senses), we can note a remarkable historical lapse: approximately 100 years between the eyes and the ears…[9].” It took a while for sound to gain independence from the image, becoming an artistic form in its own right. Whether in performance, music composition, photography, installation, moving images, or as a signal to generate sound and/or images, sound is at the center of your practice: it is the major component. Do you consider yourself a sound artist first?

Richard Garet: I think that I consider myself an artist, a contemporary artist, whose work utilizes sound at its core. Rather than distinguishing between whether sound or visuals are the most important thing I would indicate that, for me, time is the most sensitive thing. My pieces are time-based and even when they reach complete stillness time is still very present. Also my pieces range from total immateriality to material form depending on the work, and that changes the focus too. Especially if the work is also comprised of visual elements that are orchestrated and articulated within the work. Also there are at play elements of interdisciplinary approaches to media, and a wide range of media sources are involved from analog to digital. However, if someone calls me a sound artist this is accurate too, but I find the term somewhat limiting and boxing… I prefer to be seen as an interdisciplinary artist.

Esther Bourdages works in the visual arts and technology art fields as a writer, independent curator and scholar. She holds a MA in Art History from Université de Montréal, where she wrote about the Swiss sculptor Jean Tinguely and the relationship between sculpture within an expanded field, as multimedia and sound art. Her curatorial research explores art forms such as site-specific art, installation art and sculpture, often in conjunction with technology (media and digital art). She develops since couple years a research on curating sound art, that she had opportunities to present in some contexts, as Mutek and Eastern Bloc in Montreal.

Working as a long-term collaborator on contemporary art exhibitions with the Darling Foundry / Quartier Éphemère in Montréal has provided many opportunities to develop her work in these areas. Esther Bourdages is particularly interested in developing interdisciplinary projects that relate to contemporary ideas in the fields of architecture, anthropology, urbanism, and cultural studies. Recent work related to this has examined urban environments in relation to the social and historical fabric of cities. An especially important aspect of her curatorial practice is sound, which she endeavours to treat as an independent rather than supplementary medium. She has authored many articles and critical commentaries on contemporary art. In addition to her creative practice, she is also actively involved in artist-run-centres and independent structures - as Agence Topo and Perte de signal. She is currently the Secretary, after to be President (2012-2016), on the Board of Director at Eastern Bloc, a leading Digital Art Exhibition & Production Centre dedicated for emerging artists. She is involved since many years with Quartier Ephémère / Darling Foundry. During 2015, she was the editor in chief of .dpi, a Journal dedicated to digital and feminism culture, produced by the Studio XX in Montreal. She is co-host of CAFE on CKUT radio, FM 90.3 since 2011, where she talks about art and culture.
She works at OPTICA, centre d'art contemporain since 2017.

As a musician, she performs under the name of Esther B - she plays turntable, handles vinyl records, and records soundscapes. She has performed in Canada, the US and France ; additionally, her works have been presented in England, Germany, Palestine, Portugal, Belgium and Danemark. Improvisation allows to her to create raw, non-linear music peppered with altered sonic quotes and abstracted sounds, textures mostly produced by vinyls that have undergone specific alterations (grinding, cutting, etc.). She is a member of the turntable trio Vinyl Interventions with Carrie Gates (Saskatoon) and Marinko Jareb (St. Catherines, Ontario). This outfit has been presenting its eponymous workshop. Since 2002 She has organized A Microphone in a Noize Storm, a concert series dedicated to new music. She also do radio art pieces based on field recordings.
esther.bourdages [at] gmail.com